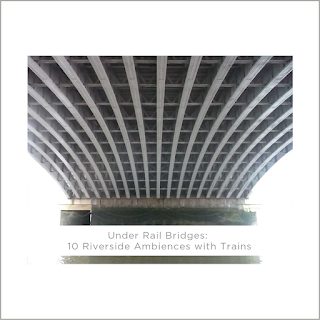 A collection of ambiences from underneath every railway bridge crossing the Thames in London. Most recordings are dynamic enough to allow for easy isolation of train sounds for use as an individual effect, with periods of quieter urban and suburban soundscapes in between – 2 kinds of library for the price of one, essentially.
All recordings made with a pair of DPA 4060s into a Tascam Dr-100mk3.

After a year of producing my podcast 'Field Trips', I found myself with over four hours of material of varying quality. I can't reasonably expect anyone to listen to all of that, so this album is meant as a "best of" compilation - my favourite recordings from the series.

Whereas previous projects of mine have been more thematically consistent with a pre-planned concept to work from, with this album I instead adopted a more curatorial mindset, the results of which I found quite interesting. There's no overarching theme here, but I do recognise an aesthetic continuity or "style" in the recordings I've selected. It's not something I had previously been consciously aware of, but I seem to gravitate to crowded places with a more explicitly musical element to them, or otherwise I enjoy quieter places by the water. There's also less emphasis on ambiences and more of a focus on scenes, events, happenings, etc. - moments with a bit more of a narrative to follow.

The main benefit to this process is that the recordings haven't been in any way restricted or forced by any concept: Taking my album Dochuki for comparison, while hiking along the Tokaido road I would sometimes not find anything of interest to record but still had to make a recording for the sake of thematic consistency (one track for each post-station on the road), but sometimes I also came across several interesting sounds/capes in the same area but had to pick only one for the same reason. As a result I have mixed thoughts on that album: On the one hand it contains some of my best recordings, on the other hand there are some dull segments. I don't feel the same way about this album - The recordings may be arbitrary, but what I hope is that a higher standard is maintained throughout in regards to both technical quality as well as substance.

My parents recently moved house and while going through all of their belongings came across a number of outdated recording media - cassettes, reel to reel tape, minidiscs, even a couple of microcassettes - which they gave to me to see if I found anything interesting. Of the cassettes, most of them were mixtapes and practice tapes for my mother (she's a classical singer), but this one stood out to me. One side is of when my mother was pregnant with my older sister, and the other side was recorded three years later when she was pregnant with me. Maybe these recordings only mean something to me but I thought they were neat.

This film was made as part of my MA course in ethnomusicology. In it, I hoped to not only portray the pair as intriguing and talented musicians but also as witty and charismatic friends. Furthermore, the film investigates the inevitable dichotomies inherent in trying to create an album of free improvisations; how can a genre so ephemeral be appropriately contextualised for a closed and fixed document?

The album should be out sometime soon.

Field Trips is a short podcast in which I talk about field recording and listening - why I do it, what I notice, and the often indistinct line between 'sound' and 'music. The show is both an excuse to go out recording more regularly, as well an attempt to explain my hobby to people who might not otherwise be familiar with it (while also appealing to other like-minded recordists).

All episodes are free to download sans-commentary from mola-recordings.bandcamp.com/album/field-trips where you can also choose to leave a donation to help support the show, if you'd like.


The first half of the film presents three scenes, each depicting a perspective on humanity's search for a deeper life meaning: The first scene shows us literally reaching down into the foundation of a Roman Catholic church - an established symbol of both devotion and institution - exposing a hidden connection to the natural world. Following this, a group of people participate in a more modern approach to spirituality by abandoning the church and even the city entirely in an attempt to reestablish that same connection to the Earth. Finally, members of the Red Cross present a third perspective in devoting themselves to more humanist ventures - rather than the natural or the supernatural - in a way that compliments the organisation's religious background.
The performance that follows took place in an abandoned factory that architecturally shares many traits with the Catholic Church seen at the start of the film: It's a wide reverberant space with large pillars spaced evenly throughout. There is an abundance of grey and the walls are decorated with names and images and messages. Even the light from outside shines through in patches just as we saw before. Our almost juvenile crashing and banging juxtaposes with the low fidelity sound of prayer from an electronic rosary to reenforce the artists' shared personal take on worship and spirituality.
The film ends with a conversation between the two artists in which they express their frustration at recording the sound of bells, an everpresent symbol of religious culture that seems ironically elusive. The metaphor should be apparent.

Four Points is a collection of compositions created from recordings made at each of Britain's extreme geographical points. Although these recordings are from similar locations, their distance from each other clearly presents distinct sonic individualities that are expressed through both social factors as well as geographical features, demonstrating an inherent diversity within our coastal soundscape that is often overlooked.

Premiered at the Louise House in Forest Hill as part of V22's Summer Club 2016.